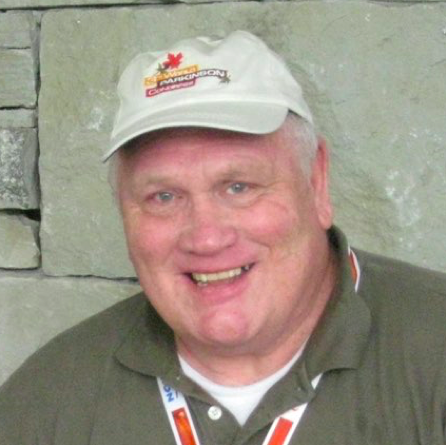 On the 23rd May 2019, very sadly leading Parkinson’s advocate Ryan passed away surrounded by his family.

Scrolling through the PM advocate wall, country by country, Canada punches well above its weight, despite having only four advocates. These are, however, exceptional people; a fantastic four that are positive, modest, caring, selfless and more fun than should be feasible – given what brings us all together is this chronic condition. It was very sad news to learn that this Canadian quartet is now a trio – with a huge void left by the passing of Ryan Tripp, announced on May 26, 2019.

A suitably touching outpouring of love and respect followed on social media. In the extended Parkinson’s family, Ryan was everyone’s favourite uncle and has been a feature of recent WPCs as a very active ambassador. His passing now, just over a week before WPC Kyoto, will make all who met him more acutely aware of his absence.

A ‘giant’ both physically and with a larger than life presence, Ryan would go out of his way to meet everyone and put them at their ease – he was quite simply one of the warmest, kindest people you could be fortunate enough to meet. Within ten minutes you were his friend – and that was for life and beyond; his inclusive ethos will be his legacy.

I met Ryan in Portland in 2016 – at my first WPC, by which time he had been diagnosed twenty years (in his 40s, like me). I was wo-manning my WPC partners’ table as Spotlight YOPD – the charity having launched earlier that year. A huge man with the biggest smile wearing a bright yellow T-shirt and sporting a lanyard heavy with badges and passes introduced himself. He is one of a dozen or so friends, and I mean proper friends, that I made that week. 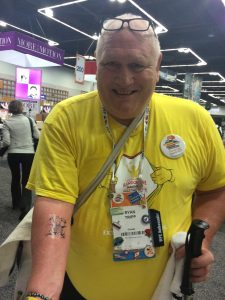 He was like a solar eclipse, instead of casting a shadow over my table he brought his own sunshine, packed with hope and love. He left sporting one of our ‘Parkie Power’ tattoos; undoubtedly a sign that we had bonded and would chat a few times during that inspiring week.

A year later I met Ryan again; both of us this time advocates for CPT and attending the research meetings at Grand Rapids. Another favourite photo opportunity arose… I’ve no idea what is going on in this shot but it shows that Parkinson’s transcends age, gender and nationality and through adversity brings out the very best in people. 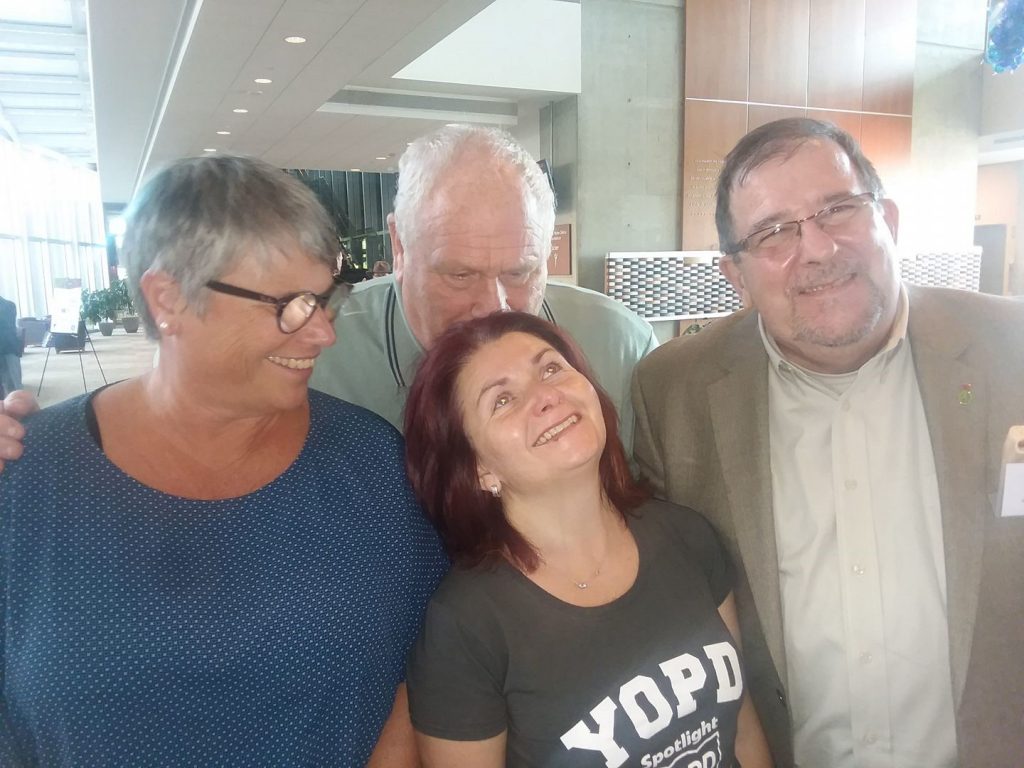 Beginning to struggle with various health issues, we didn’t see Ryan at Grand Challenges the following year. Eros and I attempted to visit him at his home in Ontario but Ryan, at that point, wasn’t up for seeing us. This in itself was very unusual and a sign that his health was becoming a challenge. Ryan was a people person and for him to not want to meet up was unheard of. While his physical health became an increasing challenge, his positive spirit returned and reached out in an occasional email at the end of last year and the first few month of this.

On Ryan’s PM profile page he says, “I want total inclusion of all people associated with Parkinson’s as equal members with equal input into our progress to improve quality of life and to ultimately find a cure!”

Read that again…  Ryan wasn’t a patient scientist, he wasn’t a creative but he made a huge difference, he was a people person and knew that his strength was in making all those he met feel as if they belonged; encouraged to play their part on the way to the cure.

In my own PD journey – now nearly seven years along the road – I can see the cracks, I can see the potholes, I can see the diversions, I can see the roadblocks. I have learned from people like Tom, Jon, Ryan, Jill, Soania and Jean and all who have walked this road before. On their shoulders I can see further, a new horizon, a new day… a cure.