Thank you for visiting Parkinson’s Movement.

This site is now an archived site. To stay up to date with all our research news and for resources for living well with Parkinson’s, please visit our new website.

The sections below explain more fully each level of his advocacy pyramid.

The pyramid shows the starting point as being the diagnosis, although of course many of the symptoms will have been apparent before this. I think, however, that diagnosis is when the psychological journey starts because there is a name for your condition and you have some concept of what you have in store.

This stage is one I think everyone experiences. In fact, I would say many, if not most people with Parkinson’s do not actually get beyond this stage. The shock, anger, denial or S.A.D phase is one where we are introspective. We build protective barriers around ourselves and nurse the wounds, not so much of the physical effects of the condition, but more of the mental effects. At this stage, the condition is all about us, and to a certain extent we are selfish – no one else understands what we are going through.

This is the key moment in the transition from misery to happiness. Slowly but surely, you begin to tell people close to you about how you feel. You begin to realise, perhaps subconsciously, that the only reason people don’t understand what you are going through is because you have not communicated it to them. You start to understand that communication is quite a good therapy – a problem shared is a problem halved. Furthermore, you realise that people close to you and even those not so close are prepared to listen and be sympathetic without in any way pitying you or treating you any different to the way they did before. In fact it is the very act of communicating with friends and family that ensures that they do treat you the same.

Another key moment. You begin to accept Parkinson’s as being part of who you are. You are no longer the person you once were and you accept that your life has changed irretrievably. You start to alter your ambitions for the future and tailor them so that they take your Parkinson’s into account. You are adapting to the new you and are beginning to concentrate on the positives of this and are more concerned with the things you can still do rather than things that Parkinson’s has interfered with.

Gradually you start to face the future with Parkinson’s; learning a little bit more about the condition; speaking in more constructive terms with your consultant and bit by bit becoming more accustomed to the idea that you have a long-term degenerative neurological condition.

This is the stage in which Parkinson’s becomes a wider issue than simply you as an individual. You start talking to other people, comparing stories, listening to their experiences. You begin to look beyond your own personal fate and realise that your experiences might actually help others.

Participation is the stage when you might join a group or take an interest in a particular aspect of the condition such as looking into the prospect of new treatments in the pipeline or contributing to a Parkinson’s group or forum. You realise that by contributing constructively to the Parkinson’s community, you are not only helping other people but you are helping yourself feel better about “you”.

You and your colleagues are part of a group who are actually making a difference in the world of Parkinson’s. Your insight, passion, urgency, focus, fundraising, empathy and participation are having a direct influence on the future treatment and care of people with Parkinson’s.

This is why Parkinson’s Movement was formed.

And with your help, this is what the Parkinson’s Movement and The Cure Parkinson’s Trust together hope to achieve.

General information about what you can do to help advance research:

Tom Isaacs had a vision that PwPs can and should support research through advocacy. Explore the toggles below to find out more about some of the ways of getting involved in clinical trials, research funding,  media & awareness, regulation, industry & ethics.

“The only way we can develop new treatments is to ensure rigorous testing in clinical trials.” 45 per cent of all clinical trials are delayed because of difficulties enrolling participants. Reasons for this include research not being offered, the relevance of the research not being clear, and misconceptions of what is involved. If we are to develop potential cures for Parkinson’s, this needs to change.  Not all studies are interventional trials.  Clinical studies fall into the following main categories:

However, there are so many things that we/you can do to help:

“We must recognise that although money is crucial to enable progress, teamwork is the only thing that can realise it.” PwP can support funding by working with researchers to leverage funds from third parties for Parkinson’s research/curative projects. The voice of PwP adds credibility and clarifies the need for and the relevance of the project.  Involving people with Parkinson’s in funding pitches provides context and ensures the relevance to the wider Parkinson’s community. Many government funders insist that people with Parkinson’s are included in applications and we need to ensure that these contributions are valuable to all parties. This is called patient and public involvement:

Examples:  In August 2017 CPT hosted a meeting for eight Advocates to help shape a new trial for Exenatide.  The group debated outcomes and measures, recruitment issues, the duration of the placebo arm biological samples to be collected and off assessments, providing valuable insights.

“One of the greatest things about Coastin’ was that PR for Tom meant PR for Parkinson’s. While the walk continued they were one and the same. I heard Q’s voice in my head, “You’re a media tart.” Tom Isaacs Ways of communicating:

Example: David Murray, an advocate from Wales has represented The Cure Parkinson’s Trust with the Neurological Alliance in Wales for the last 5 years.  David has also influenced research bids with Cardiff University.

Tom Isaacs was a chartered surveyor working as a director of a London property company when he was diagnosed with Parkinson’s disease in 1995. He had a wide circle of friends, a love of travel, adventure, singing and parties and a wicked sense of humour. He was just 26. At the time, scientists and doctors accepted without question that Parkinson’s was an incurable condition. They strove to alleviate the symptoms but even on that front progress was woefully slow. Isaacs simply refused to accept this conclusion. He started to ask the question “Why?”, determined that one day he would be able to describe himself as someone who used to have Parkinson’s. Sadly, that was not to be, but his work in the intervening years between his diagnosis and his death on 31st May 2017 at the age of 49 has brought this objective tantalisingly close for others with the condition. Thomas William Isaacs was born on 2nd April 1968, the third and youngest child in a close-knit family. His father was a successful London solicitor who shared Tom’s acute sense of humour and ready wit. He described his mother as the principal influence of his life. From an early age he learned to accept some of the restrictions of health problems, being diagnosed as a coeliac while still a toddler. He later described as a turning point a dream he had some 2½ years after he was diagnosed. In the dream he took over a workman’s pneumatic drill and found that with his shaking hands he could achieve more than others: he woke determined to use his Parkinson’s to achieve more in life than he could have done without it. In April 2002 he set out to walk round the coastline of Britain, a distance of 4,500 miles which he resolved to complete in 365 days. This would have been a challenge for a fit person: for a man who sometimes had difficulty in walking across a room it appeared absurd. Yet he not only completed the walk precisely on schedule: he succeeded in raising some £350,000 for research and raised awareness of Parkinson’s disease throughout Britain and beyond. During this year he learned that it was possible to challenge the ceaseless encroachment of Parkinson’s. 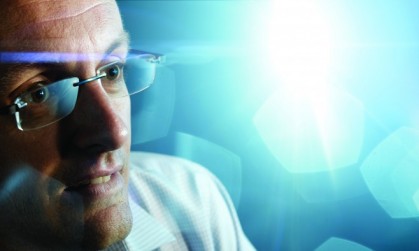 Over a thousand people including family, friends and supporters, and his future wife Lyndsey who he describes as “the most incredible girl he had ever met”, joined him for days at a time, including one friend who walked over 800 miles in the most remote part of Scotland. He started and finished at the Millennium Bridge in London, chosen because, like him, it was “wobbly”. Two days later he ran the London Marathon. He told the story of the walk in his book Shake Well Before Use.

On his return he worked with three older men with Parkinson’s, Sir Richard Nichols, former Lord Mayor of London, Air Vice Marshal Michael Dicken and Sir David Jones, Chief Executive of Next plc. With typical Isaacs humour they called themselves the Movers and Shakers. With the assistance of Helen Matthews, a close friend of Isaacs’, they set up The Cure Parkinson’s Trust (CPT), the name alone a challenge to the concept that Parkinson’s was incurable.

All four men had Parkinson’s and the patient-led perspective of the charity was one of its core qualities. The Trust has now been going for more than ten years and is recognised as a key player in the world of research, setting up and funding linked clinical trials on an international basis and taking a leading role in research conferences throughout the world. Isaacs built up his technical knowledge to a level where he could take part in scientific discussions at the highest level. He earned the respect and support of such leading Parkinson’s researchers as Professor Andrew Lees and Professor Steven Gill and enlisted Dr. Richard Wyse as Director of Research and Development for CPT. The incredible support he received from Lyndsey enabled him to continue to the end of his life travelling constantly in Britain and abroad on behalf of the Trust.

His ability to communicate with people from every background was exceptional – speaking recently in Rome about stem cells that led to an audience with the Pope. He worked closely with many international research organisations including the Van Andel Research Institute and the Michael J. Fox Foundation and was adept at recruiting celebrities whose lives or families had been affected by the disease. He was impressive on the radio, walking with Clare Balding, presenting a Radio 4 documentary which was nominated for a Sony Award and being named Charity Personality of the year in 2004. He was an Olympic torchbearer in 2012. A brilliant and inspirational speaker, his self-deprecating humour put his audience at ease despite his flailing arms caused by dyskinesia and loss of balance. “I have been asked to be short but moving,” he would declare. “At 5’7” I am certainly short and I am always moving.” His immense personal charm endeared him to everyone he met, winning new supporters for the CPT. Above all, he inspired people with Parkinson’s, giving them hope that a cure will be found and a belief that their voice was being heard.